Главная › Блог › Lyn Wendon: Some of the Learning Strategies that Empower Teaching English with Letterland

Lyn Wendon: Some of the Learning Strategies that Empower Teaching English with Letterland 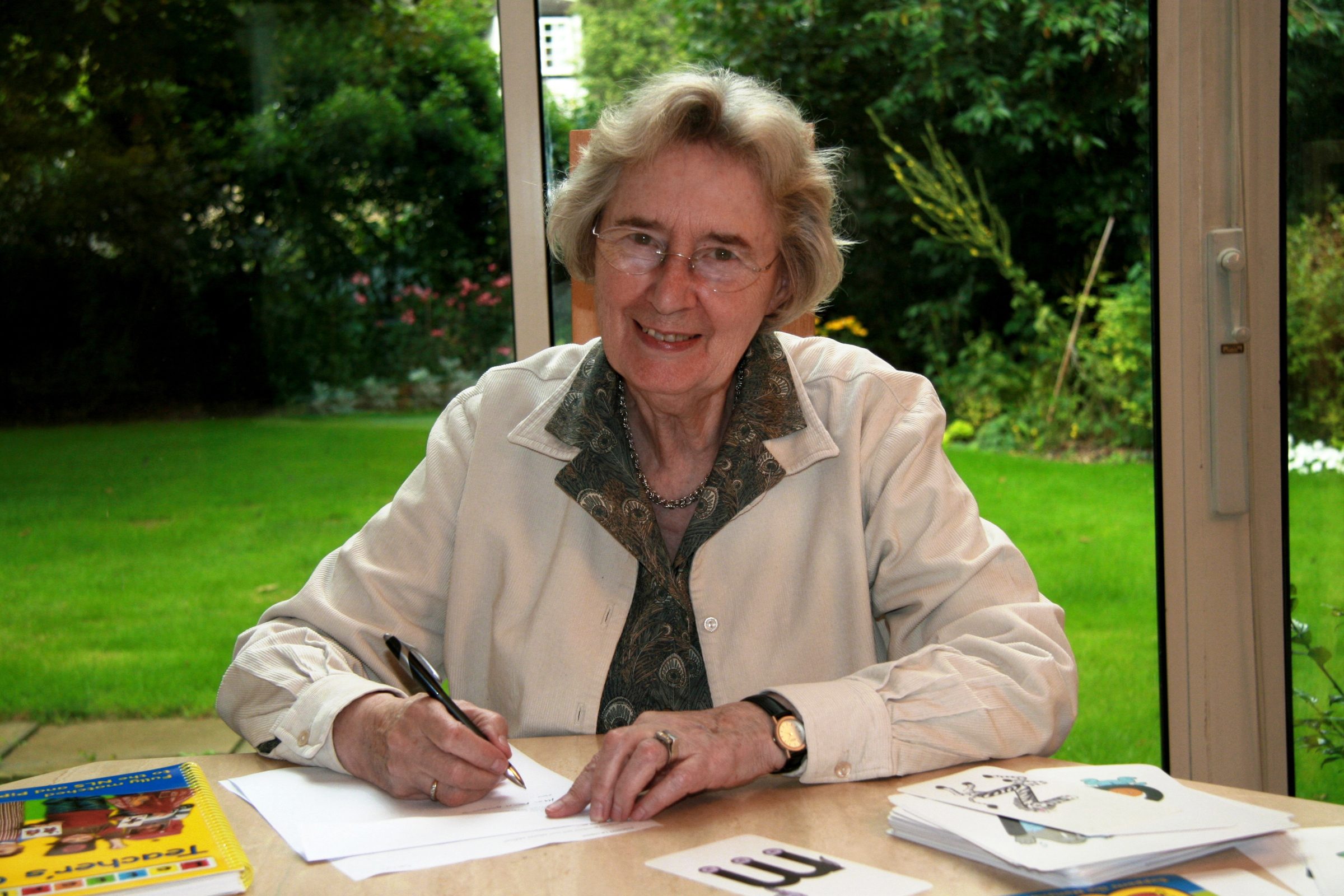 Written language captures the sounds which come out of our mouths as we speak. To learn a new language based on phonics (teaching the sounds made by the letters of the Roman Alphabet — Aa—Zz) makes sense when the language is a regular one, such as Italian, Spanish, Finnish, German or Austrian.

But English???  Surely not English, with all its irregularities and exceptions!  Yes, English!  For many years educators in English-speaking countries rejected traditional teaching of phonics, believing that because English spelling is so irregular, to give priority to teaching letter sounds was too difficult and confusing. It required too much rote learning, it was unpopular and boring for 5, 6 and 7yr olds, and worse, it gave them a distaste for reading.  Instead, many educators favoured a ‘whole word’ approach. (It was also called the ‘whole language’ method.) It relied on children memorising and practising a wide store of whole-word shapes, to be recognised as ‘sight vocabulary’ without analysing the letter sounds in them.  Spelling required memorising the strings of letter names that made up each word.

It took 30 years of debate and argument among teachers of reading in America – years which some educators described as ‘the Reading Wars’ – followed by some definitive American research published in the US National Reading Panel Report, 2000[1], to finally prove that the ‘whole language’ approach left too many children with inadequate reading achievement and too poor spelling ability.  So, the pendulum swung back to phonics. The new challenge became how to teach phonics (basically how to crack the alphabetic sound-code) without the drawbacks caused by traditional phonics methods.

In developing the Letterland System I had always been convinced that teaching English via the phonics route was essential.  Yes, it was true that a core group of roughly 100 frequently occurring words that were irregular did need to be learned as whole-word shapes (words like the, said, was, you, they, their, there, one, asked, called, could, etc.) but for the greater majority of English words the best progress could be made by understanding how to sound out each letter in a word – or a cluster of frequently recurring two or three letter units, such as ch, sh, wh, ea, ai, ow, igh, and by learning to blend the series of sounds together to discover the meaning of the word.

However, my experience with native English-speaking 5, 6 and 7year olds who were finding it exceptionally difficult to learn to read in their own native written English, caused me to first try to make the plain black letters more friendly for them.  I needed to fuse ‘life’ into those meaningless plain, black letter shapes and give them direction.  So I sketched little animals, people and objects into them, and oriented as many of the letter characters as possible to be rightward facing, in what I labelled ‘the Reading Direction’. My concern was to avoid otherwise predictable confusions, for example, between b, d, p and q, between f and t, m and w, between M and W, N and H, n and u, and more).

I asked the children to sketch these letter characters within the plain letters, too, and called this learning strategy ‘picture coding’. Entering into the letters and bringing them to life themselves made each letter shape immediately more familiar for the children, and equally important, they enjoyed it and it gave them a sense of ownership of the letters.

Because the two letters, s and h, are being reused to represent a new sound, the inexperienced child finds that, as soon as he or she is asked to read a word with sh in it, that first knowledge is of no use! The child must apply a new, unrelated sound instead. Given that there are many more similar, recurring sound-changes in written English where two (or three) letters group together to present a new sound, it is not surprising that young children find learning between 40 to 60 such rules, even when spread over time, both difficult and unappealing.

In my attempt to make the plain letter shapes more friendly I discovered that the strategy of giving ‘life’ to the letters’ opened up a whole range of new options. To avoid such dry memorizing of many facts without reasons the Letterland system replaces typical ‘rule talk’ with brief stories about the letter people, whom we decided lived in a magical place called Letterland. The children and I started calling these ‘humanised letters’ by alliterative names: Annie Apple, Bouncy Ben, Clever Cat, Dippy Duck, Eddy Elephant, Firefighter Fred, Golden Girl, Harry Hat Man, etc.

At first, I didn’t realise that these alliterative names were going to save us from needing to learn and make use of all 26 of the treacherous traditional letter names – “aee, bee, cee, dee, ee, ef, gee, aitch,” etc.  These names deserve to be called ‘treacherous’ because no less than 15 of them actually begin with the sound of another letter!  Here they all are, listed with their misleading beginning sounds beside them.

By contrast every Letterland character name begins with that letter’s correct sound. So one simple strategy is all a child needs for learning all 26 letters’ sounds:  Just START to say the Letterland character’s name, then STOP!  So for Clever Cat, just say “c…”. For Firefighter Fred just say “fff…”. For Golden Girl,” g…”, Harry Hat Man, hhh…”, etc.

In England the British Department of Education has been the first native -English-speaking country to recognize the importance of deferring traditional letter-name teaching, as set out in its 2011 National Curriculum. In May, 2011 the Department also initiated an obligatory Phonics screening check, introduced to ensure that children were taught letter sounds as the first priority. Furthermore, parents were informed to support this emphasis instead of holding on to the well-worn but misleading tradition of teaching the letter names, ‘aee, bee, cee,’ etc. first. The raised standards brought about by this break with tradition have since been welcomed and well documented.[1]

Why are the plain rules so difficult to remember?  Because the ‘aee, bee, cee’ letter names have no meaning except as labels for an assortment of 26 odd, initially meaningless shapes, and the bare phonic facts have no reason, no cause-and-effect. Each rule is just an impersonal fact!  So, I found that creating reasons for phonic facts became a core strategy in making Letterland into an effective phonic program. 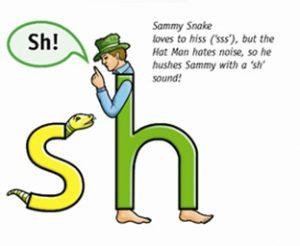 Our alliterative character names also served us well because we could attribute human behavior to our Letterland characters, running parallel with the impersonal rule facts, but endowing them with reasons! So, for example, instead of having to disregard first knowledge about s and about h in the above sh rule, the child actually uses the two Letterlanders to arrive at the new sound. Harry turns back and hushes Sammy with a “sh” sound, because Harry Hat Man hates noise! 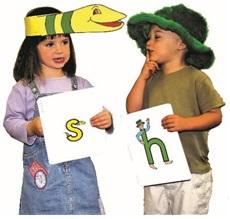 The explanation is, of course, pure fiction, but children are at home in the world of make-believe. As a result, they remember not only the fiction, but the fact which it explains. And by giving the letters human qualities it suddenly becomes possible for children to use their prior knowledge about human behavior to understand a wide range of letter behaviors! They can even pretend to be the ‘Letterlanders’ and act out making words together!

A most important point here is this: with every new sound you teach, you give children an opportunity to use their minds! You give them an ideational bridge which validates their first learning while leading to the new knowledge they need. In addition, if the child forgets the new sound, the story logic can function as a recall route to recover it.

Furthermore, although the new sound to be learned is fleeting, the children’s own drawings are not. They have ‘captured’ the new sound, and they themselves have confirmed it, both physically and imaginatively. 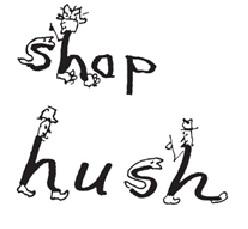 Working through the phonic facts at this higher interest level gradually helps the children to learn all the predictable two, three and even four-letter patterns which the English language contains. Moreover, this parallel logic while accurately containing the phonic facts, also captures children’s imaginations. Imagination, it turns out, is a powerful ally for effective learning!

I have found it heartening to discover that these Letterland learning strategies (and others I will share in a sequel article) work well not only for English, Irish, Scottish and Welsh children in school, home and preschool settings, but also in all sorts of unusual and challenging situations abroad.  The system has reached aboriginal children in Australia, Tibetan boy monks, Inuit (Eskimo) communities in frozen parts of Canada, Arabic-speaking children learning English in Jordan, Ethiopian farm children seeking asylum in Israel, Russian children learning English in Siberia, youngsters from Nepal learning English in India, and countless numbers of children in many parts of America and of Africa, and more. These many widely differing settings have proven to me Letterland’s ability to make all those rather mysterious black squiggles that we call ‘the alphabet’, fun and easy to learn for children everywhere, even when the letters frequently change their sounds in words! That is why in the early 2000’s we created the special course – Letterland Fix-it Phonics – designed to make English fun and easy to remember as a foreign/second language.

[1] An evidence-based assessment of the scientific research literature on reading and its implications, set up by the Director of the US National Institute for Child Health in 1997.

[2] Quote from School Reform Minister Nick Gibb in 2015: «By 2014 the proportion of pupils meeting the new standard had risen to 74% — equivalent to 102,000 more 6-year-olds enabled to read more effectively. In 611 primary schools, some in the most deprived parts of the country, at least 95% of pupils met the expected standard.»